Here’s a neat little demonstration of how depth of field is affected by aperture. 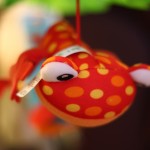 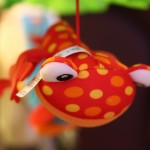 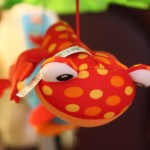 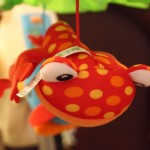 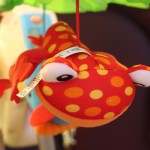 It’s not as dramatic a demonstration as it could be, as I really wasn’t intending to post this series of photos. I was just messing around with my new tripod*, experimenting with taking long-exposure shots. Turns out I ended up with a series of photographs that demonstrates the effects of changes in aperture quite nicely.

The series ranges from f/1.8, 0.8 sec. in the first frame to f/11, 30 sec. in the last, all at ISO 100. To keep that ISO and get longer than a 30-second exposure and thus be able to use smaller apertures, I’d have had to go to bulb mode, and as I don’t have a remote shutter release I would have had to hold down the button manually and just try to get as close as possible to accurate exposure times. That’s just too much trouble to go to for an improvised demonstration.

You’ll notice that in the first frame at f/1.8, the depth of field covers little more than just the eye-bud nearest the camera. The rest is a blur.

As you progress through the series toward f/11 you see that the depth of field increases to include a much greater portion of the frog’s body, ending with almost the entire body being in relatively good focus. The background too becomes more and more defined.

Depth of field is inversely related to aperture; the larger the aperture, the smaller the depth of field, and vice-versa. By using a large-ish aperture you can control which elements of your photograph are in focus, and therefore emphasized, while keeping the rest of the background and/or foreground relatively obscured. Alternatively, by using a very small aperture, you can achieve a much larger depth of field, bringing more of your photograph into sharp focus.

Portrait and close-up photography lends itself to using larger apertures, allowing the main subject to “pop” out of the background into sharp focus. At the other end of the spectrum, landscape and architecture photographers generally want as much of their photograph to be in sharp focus as possible, and thus tend to favor the use of smaller apertures.

This is a basic, basic concept in photography, and anyone with more than a passing interest in pursuing photography as a hobby will already know this stuff by heart. But it’s good to see a concept demonstrated in simplified form so as to better understand it “in the field”, so to speak.

* The Induro CX213 with SA-23 ballhead. Induro is the American-imported version of Benro, which is the less-expensive, Chinese-made, almost- just-as-good copy of French-born, now Italian-made Gitzo tripods, which are widely regarded as being at the top of the tripod food chain.